Do Guinea Pigs and Cats Get Along? 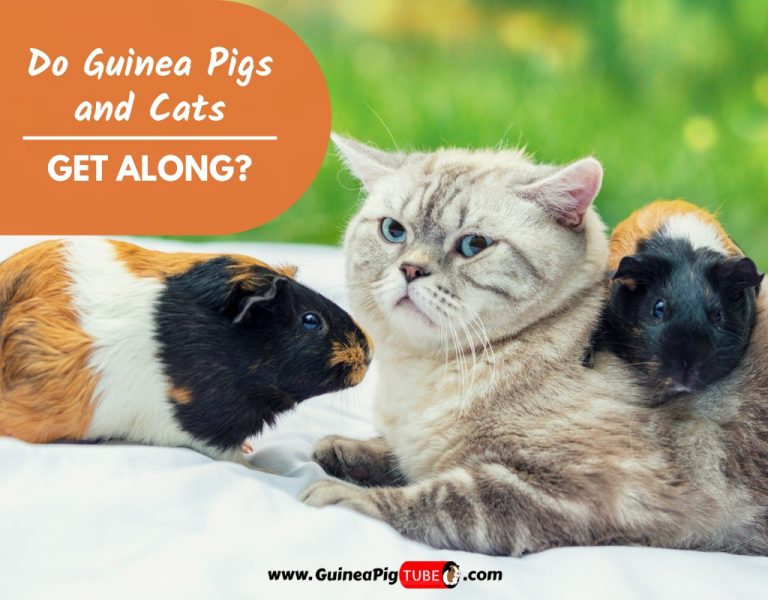 I have always wanted a guinea pig, but I couldn’t get one because I had a cat. I was afraid that the little guinea pig might get hurt but I started doing my research and eventually, I found out how to get a cat and a guinea pig to get along.

So, the question is – do guinea pigs and cats get along? Cats are usually friendly with guinea pigs and they can get along with some training but never forget that cats are predators and guinea pigs are prey animals. Some cats will immediately love the guinea pig and only play with it, while other cats will look at it as a food source.

I know most of the readers want a black or white answer but we can’t give you that type of an answer because the relationship between them practically depends on the cat.

There are many things to say about the relationship between cats and guinea pigs and also about ways to prevent incidents from happening. So, if you want more specific information on this topic, you should keep reading our article.

Why the Relationship Between Cats and Guinea Pigs Is Based on the Cat’s Behavior?

You may believe it or not but cats are actually down to having guinea pigs as friends. Even if this is true, you cannot completely trust your predator pet to be gentle with your prey one. In order to prevent trouble, you need to know some tips on how to prevent this but before anything you need to understand their behaviors.

Firstly, you have to keep in mind that in the wild nature the cats are predators and guinea pigs are prey animals. As friendly as you want your cat to be you should be aware that instincts can never completely go away. In a second of not paying attention to their interaction, your guinea pig could get hurt.

Another thing to keep in mind is that even if the cat might be scared at first, it will get used to the guinea pig eventually.

Note: Don’t get your hopes high if you see that they are not fighting in the first days or weeks of friendship. Cats can be really smart and wait for the perfect timing to attack.

Another Point of View

The things I have already said are kind of a general opinion. Although, there are some people who think that cats are the friendly pets and that the little guinea pigs are the trouble-makers in this relationship. It might seem a reasonable point of view but I strongly disagree as I did not find any evidence to sustain this opinion. This little paragraph might seem pointless, but I didn’t want to just talk about the general opinion and ignore this one.

Should You Let Your Guinea Pig and Cat Play Together?

Well, firstly, you need to be very careful and watch how a cat and a guinea pig behaves when you introduce them to each other.

Furthermore, you need to watch the cat’s reactions as they might be a little violent. If the cat is scratching or trying to bite the little pig, separate them and try to create some boundaries for both of them to slowly make them bond.

Cats are smart pets, and they can fool you very easily. Sometimes they might seem very friendly and one time they might become very dangerous.

When guinea pigs are attacked their first reaction is to freeze and this defense can rarely work out. If the danger persists, they will try to flee and that is their only way of surviving. Guinea pigs fight back extremely rarely but fighting back for them means chewing or biting their opponent. So, they practically cannot defend themselves if the predator is big enough but if the predator is a kitten then the kitten might get hurt too if it provokes the guinea pig.

This is definitely the most important thing and should always be applied – never leave your cats and guinea pigs alone. Cats are predators, and part of their behavior means being wily, crafty and also very smart. They always know when to attack the prey animals, and I don’t think you need to risk a second of distraction.

This is an obvious one, but it has its advantages and disadvantages. You can get a lid for your guinea pig cage. As I have already mentioned, cats feel safe to attack guinea pigs mostly when they are in their cages. Taking this into account you should have a lid on the cage. The top of the cage would be no problem to them, but it can be a problem for you. Having no lid on the cage might make cleaning more accessible for you.

Do not forget that your cat is capable of hurting your guinea pig without intending to do it. You can do whatever you think it will be a safer solution but I can guarantee that the most reliable and the best thing to do is to put a lid on the guinea pig cage.

3. Tight Bars on the Cage

It is recommended to have the bars of the cage as close as they can be. This way, the cat cannot stick its paws through the bars to attack the little guinea pig. This is a very easy and safe way of preventing your cute pets from fighting.

4. Keep Them in Different Rooms

Keep your cat and guinea pig in different rooms as much as you can. Put the little guinea pig cage in a room that your cat is not allowed. Primary instincts never really go away so having a predator and a little prey animal in the same room might not end very well. Keeping them as far as possible from each other is a safety measure to prevent any type of incident between your pets.

On the same principle, have special areas for guinea pigs that cats are not allowed. When your little piggy is out of its cage, it needs to feel safe. Guinea pigs are very alert animals (it is in their nature), and they will always be careful around themselves. Keep in mind that if they sense any kind of danger, this might be damaging for your relationship with the guinea pig as they can lose their trust in you.

5. Separate Areas for Their Toys

Keep their toys in completely different areas. Try not to mess up with their possessions. The smell is very important for cats and guinea pigs and their toys’ scent needs to be a familiar one.

To sum everything up for you, it is not impossible to have a cat and a guinea pig at the same time. There are some things you certainly need to know. The most important of them is that cats are predators and guinea pigs are prey animals. I cannot stress enough about how bad things can get if you let them alone in the room or if you leave the guinea pig unprotected.

It’s better to hear the same piece of advice a hundred times and then apply it than to have a bad incident and later regretting that you didn’t think the advice was actually important.

On the other hand, a friendship between cats and guinea pigs is not impossible but it is hard to achieve in most situations. You need a lot of patience and to be honest, it depends on your pets’ “personalities” if I may say. Best of luck!

Related: Guinea Pigs And Dogs: Can They Get Along? 7 Reasons Why Guinea Pigs Are the Best Pets for Kids